For this article, we are going to introduce you to Mathilde. Although she does not have experience in the NGO world, she is a French girl currently living and working in England, so we thought her story was interesting. Plus, her testimony could be some kind of reassurance for some people who might find themselves in a similar situation. Anyhow, we hope you will enjoy this article! Let us know in the comments what you think! 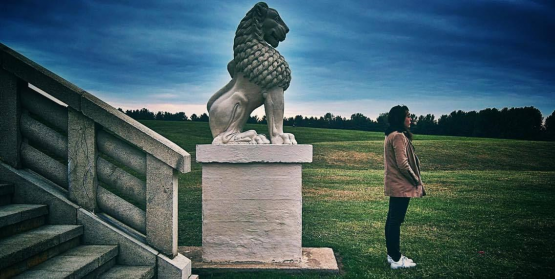 It’s no secret that today’s society “pushes” people into a certain path: once you are done with high school, you either go to university if you want a high-qualification job or learn a more “manual” job in order to start working. Mathilde, as most people, went to university. However, after the second year of her bachelor and with not so encouraging results and teachers, she was tired of it. University costs money and obviously, there is no point continuing doing something expensive which you feel is leading you nowhere. I am sure a lot of people have similar thoughts and inner-struggles: “I am not enjoying university, but this is what I am supposed to do”, “my parents will never agree with me dropping out of university” or again “what can I do without any university degree?”. Mathilde was lucky enough to have a job opportunity in England at the exact moment when she felt like she was done with university. So, she just took this opportunity. There is no point being scared, if you have a great opportunity and a chance of being happier with your life, you just go for it! She did a degree of European studies in English, because, like everybody in this degree, she mostly wanted to become fluent in English. So, having the opportunity to work in England was perfect for her: she could quit university, start working and making her own money, and in the meantime, improve her English and practice it everyday. She had every advantage in taking this job really!

In fact, she had already tried to find a job abroad, but with no result. She spent a month or two in Edinburg, location of the Fringe Festival, which attracts plenty of people, but everything was organised far before the summer. So, unfortunately, she did not work in this festival, but she ended up volunteering there at the Foodies Festival, which was a great experience, exhausting but amazing.

When asked if she chose the UK for any particular reason, apart from the chance to improve her English, she explained that she just took the opportunity that was offered to her. The geographical proximity between the UK and France was an important factor as well. “It is easier to move in a country not far from France. I think if the opportunity was in the United States or Australia, I would have thought twice before doing it. If something happens and I have to go back to France, it is less than two hours of flight and one hundred pounds”, she explained.

Focusing more on her life in England, we wondered if she struggled fitting in in a post-Brexit UK. She explained it would be a bit complicated the day they will officially be out of the EU. “But technically I have moved in the UK before they triggered Article 50, so I will normally not have real struggle to stay here.” Even for people who are reluctant to settle in the UK now out of fear of Brexit, remember that it is difficult to know exactly when and how drastic Brexit will be. If you are contributing to the British economy, the government will probably not throw thousands of EU citizens away.

Mathilde has actually decided to be living in England on the long term. She has done all of the administrative necessities to be able to stay and she pointed out that, if she went through this annoying procedure, it is not to stay only a couple of years. Besides, “I am not going back until my English is perfect and as you may see I have a lot of work to do”, she joked.

We asked her whether she thought it was easier, as a young person, to find a job in the UK or in France. Indeed, France is known for having a high unemployment rate amongst young people in particular, even for those with high qualifications. “I am mixed between the fact that you can find a job anywhere if you are ready to do any job, and the struggle to find a good job.” But, all in all, she believes that in both countries it is all about being at the right place at the right time. Also about working, we wanted to know what she would say to someone who thinks having a university degree is necessary to find a decent job nowadays. She stated that it was hard to say because it depends, it depends on what someone wants to do or on its relationship to studies for instance. “But let’s be honest”, she added, “when you have no qualification, you will probably start a job from the beginning/the lower rank and then will gain experience, in contradiction with someone who has a PhD and will be more likely to start with a more advanced work.” But again, she qualified her statement, saying that someone with a PhD in math and finds a job in a restaurant, will not be a chef from the start.

Now focusing on the whole living abroad experience, we started by asking her how hard it had been for her to move alone to a new country and start from scratch. For her, it has not been that hard, it was mainly, once again, dealing with administration. Adminstration in England is no different than the French one, which means paperwork, calls, appointments etc. “You just have to take care of all of that by yourself, as if you moved in a new city in France, but don’t worry if you can deal with the French administration, the English one is easy-peasy!”, she joked.

Her main struggle when moving abroad was not so much the fact of living in a new country but rather the transition between the life of a student to the professional life. When at university, she was surrounded by people, new possible friends, who were always up to something, but when working, it is easy to fall into a routine which consists in work, home, work, home. It requires some getting used to and finding ways to kill this routine.

Finally, she explained how living abroad influenced her vision of France. She mainly developed on the way of working in the two countries. “I think English people like to work. *laughs* In France, you work on a 35 hours-based contract, which means when you work more than 35 hours a week, you earn more. In England, you don’t have an hourly-based contract, so you do your hours, if you work more it is up to your employee to decide whether to pay you more or not.” But overall, her vision of France has not changed. On some points, she admits that mixing the French and the English way would be better. Otherwise, she does not perceive France any differently than she did before. Another thing she mentioned is the opening days in shops. In France, every shop and almost every supermarket is closed on Sundays, this is part of the French legislation (and is a debated law but it’s not the point here). “You know the struggle in France on Sunday when you need food and everything is closed. In England, you don’t have this problem, everything is open more or less, even on bank holidays.” Ahhh what a country!