Was it necessary from the appearance of the first case of Coronavirus in Lebanon to suspend flights from Iran or to protect the vulnerabilities of Hezbollah? Give the reins to the army? Count on the civic spirit of the Lebanese people? Was it necessary to preserve access to care? Or was it pivotal to prioritize the need to eat? Around the world, States are faced with delicate trade-offs between health risks and political-economic imperatives, to which particular dimensions and sensitivities are added in Lebanon. A sectarian/political dimension, which raises fundamental questions about public service, national interest, and community-driven imperatives is also a firm reality. In other words, how does the Diab government decide, and according to what criteria?

In most Western Countries, the answer is simple: the state acts in the name of the general interest, and in service of where it derives its legitimacy from its people. But when the state is deeply rooted in Confessionalism, and therefore in the defense of sectarian interests, citizens are faced with the delicate task of questioning the merits of the decisions taken by its representatives. Especially when the system in place, which is deeply clientelist, has led the country into the financial abyss which amplifies the health crisis and complicates its management. How do you import medical supplies when you run out of US dollars? How do you equip public hospitals when you have spent years gradually sucking them dry? How do you protect the most disadvantaged when government reserves are emptied? How do you ask for international aid when you are unable to aid yourself? 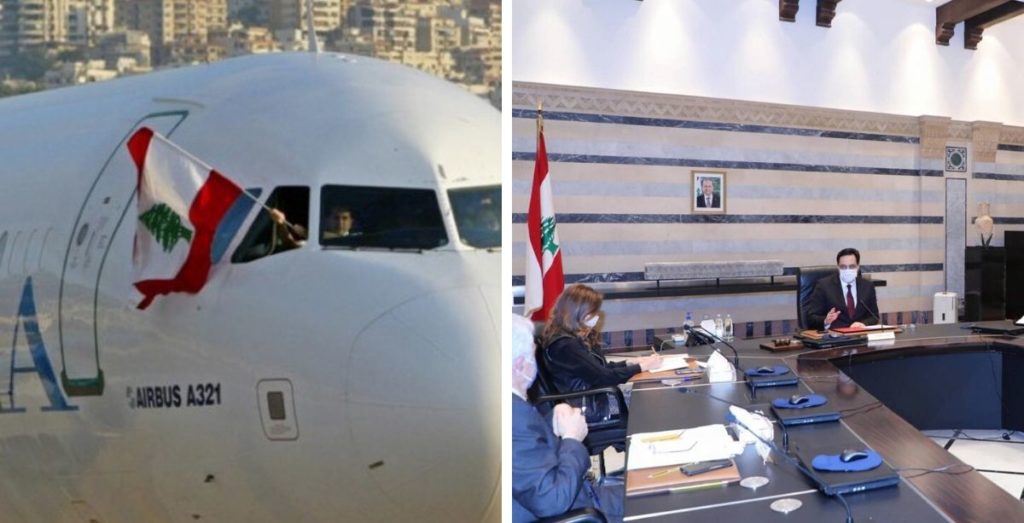 And at one of the most critical stages in our country’s history, all the state has found to do is ask the Lebanese to be what they have never been (and what they have never been requested to be): united – while politicians strengthen their grip on an increasingly destitute population. The pandemic is provoking reflections all over the world on the economic model, public policy priorities, and the role of the state. And amidst these debates, Lebanon is currently confronted with yet another major obstacle towards the annihilation of this epidemic: the 10,000 Lebanese expected to fly back to Lebanon between April 5 and 12, 2020.

The plan for the repatriation of Lebanese from abroad who wished to return was adopted during the March 31, 2020 meeting of the Council of Ministers. According to ministerial sources, the adopted plan will be implemented in two phases. The first will take place from April 5 to 12, 2020 and the second from April 27 to May 4, 2020. The idea is, therefore, to carry out the first phase, to wait two weeks to study the curve of the epidemic and then to fill in any gaps.

The plan is designed to allow those who wish to return home to do so without endangering the lives of residents in Lebanon. For this purpose, everything from screening and testing before the flight, to isolating infected individuals in separate planes has been taken into account. As the treasury is practically empty, the return journeys will be made at the passengers’ expense. Banks have subsequently been asked to facilitate transfers.

On a more positive note, difficult times have proven time and time again that the Lebanese people are willing to step in when the government does not. In a true surge of solidarity, Lebanese living abroad have offered to help those who cannot afford their tickets according to multiple media sources. The fundamental obstacle toward the containment of the virus is, however, not how these Lebanese return but rather, the risk that Lebanese returnees will not strictly comply with the instructions they are given. The plan provides for medical monitoring by hospitals, under the supervision of the Ministry of Health, to verify that the confinement instructions are followed, knowing that the Lebanese may be ‘unruly.’

This was also the reason why, without ever questioning the right of Lebanese who are abroad to return to the country, the government had reservations about massive repatriation initially. For the management of this crisis, it had planned a two-step plan: firstly closing the land, air and sea borders to passengers for two weeks to put an end to the contamination from a ‘foreign source.’ And secondly, the two-week extension of general mobilization and that of strict containment measures to make it possible to limit the spread of the virus and to flatten the curve of the number of people affected by it. Although the plan initially seemed rigid, Lebanon’s Prime Minister has had to step back from his initial stance to prevent repatriation until April 12th due to political pressures – once more proving that Lebanon is not geared by a state, but rather geared by fragmentation of political will.

At this point, as it has been proven time and time again, we can only hope the Lebanese returnees will care enough about those who never left to take on the necessary precautions and be honest. As the state believes it can unrealistically ‘contain’ the massive influx of people returning to their homes to be on lockdown with the rest of us all we have once more, is each other watching each other’s’ backs, and washing each other’s’ hands..